Why Do I Go About Cooking Spaghetti Squash? 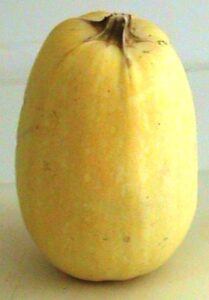 I make a habit out of cooking spaghetti squash because I want to make the healthiest, homemade noodles that can be used for my spaghetti dinners.

Spaghetti squash noodles have only 10% of the calories of those starchy pasta noodles.  And, they have a ton of vitamins and minerals that pasta can’t give us!

Can you believe it?

That makes for “guilt-free” eatin’! 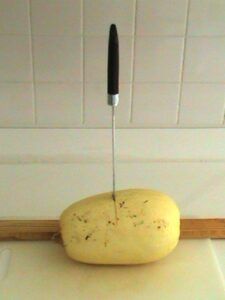 Cutting this rock hard, cylindrical squash can be a real challenge unless some strategic planning and a razor sharp knife is used – like my TUO Carving Knife!

Whether the spaghetti squash is cut in half lengthwise – or width-wise – start the cut by stabbing it with the knife.  Then, lay the knife blade in the stab wound and rock the knife back and forth – down through the squash. 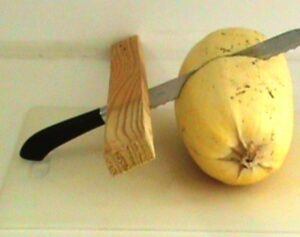 Even with a sharp knife, spaghetti squash skin can be very hard.  Sometimes, I use a block of wood or a rubber mallet – and rap the top side of the knife to help it work its way down through the squash.

It’s much easier to cut a spaghetti squash width-wise.  Also, the squash noodles will be twice as long since they run left-to-right (width-wise) through the squash.

Spoon Out The Pulp And Seeds 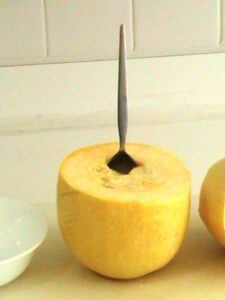 Scrape the inside of the golden spaghetti squash flesh with a spoon to remove the pulp and seeds.  There may be a few pulp strands that will stubbornly stay attached to the flesh – but, it doesn’t have to be perfect.  They’ll cook up well enough, too. 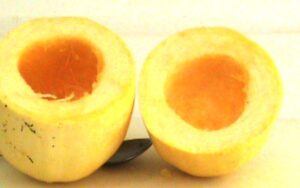 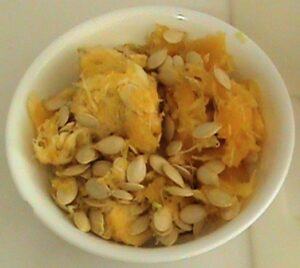 Don’t throw the seeds away!  Because, at the end of this spaghetti squash noodle recipe, I’ll tell you how to turn the seeds into the most delicious roasted seed snack!

Coat The Squash’s Flesh With Oil 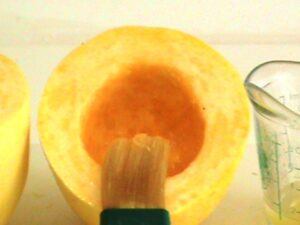 I like to use extra virgin olive oil – a couple of ounces (around 4 tablespoons) – mixed with a teaspoon of my homemade garlic salt (Made by adding 1 part garlic powder together with 2 parts salt – shaking it up to mix it well.).

Using my Cuisinart Basting Brush, liberally coat the flesh of both halves of the spaghetti squash with the olive oil / garlic salt combination.

If you decided to try the roasted seed recipe explained at the end of this article, save a tablespoon or two of the olive oil / garlic salt mix to coat the seeds you want to roast. 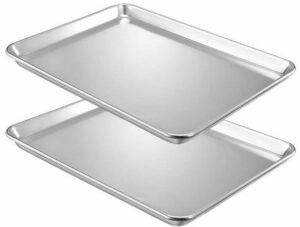 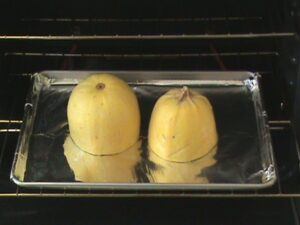 Placing the halves “flesh side down” on an aluminum foil covered baking pan, pop them into a pre-heated 400 degrees Fahrenheit oven for about 45 minutes.  Once the edges of the skin begin to brown, it’s time to take out the squash and let it cool for a half hour or more.  I usually give it an hour or so – by which time it is pretty much back to room temperature.

After the roasted squash has cooled enough to handle, take a fork and scrape out all the flesh.  It will come out in noodle-like strings just as easy as you please. 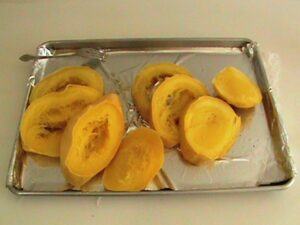 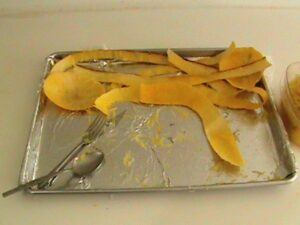 If you were smart enough to originally cut the spaghetti squash width-wise, you can make it even easier to remove the noodles by cutting one inch or inch-and-a-half sections – and use the side of the fork to scrape the noodles off the skin of each section.  It’s easier than slipping on an icy sidewalk in the middle of a blizzard!

That’s All There Is To It!

Now, you have a bowl full of tasty spaghetti squash noodles – just waiting to be topped off with your favorite spaghetti sauce.  Sometimes, I smother it with Alfredo sauce – for a change of pace.  But, either way, these squash noodles are a great substitute for pasta noodles – and your waistline will thank you!

Now, Let’s Do Something With Those Squash Seeds! 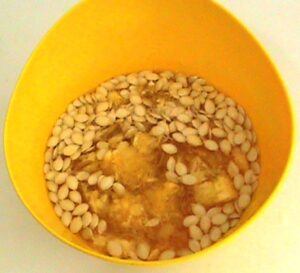 Throw the pile of pulp and seeds into a bowl and add water.  Most of the seeds will float to the top – making for easy removal.

But, I still have pick through the pulp to separate the more stubborn seeds that want to cling to the pulp relentlessly. 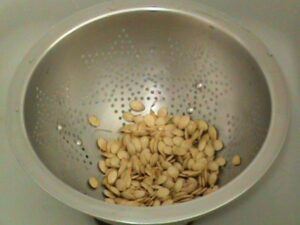 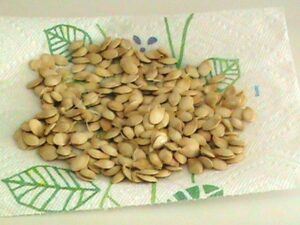 Rinse and thoroughly dry the squash seeds on a paper towel.  Then coat them with the leftover olive oil / garlic salt mix that was used for roasting the squash. 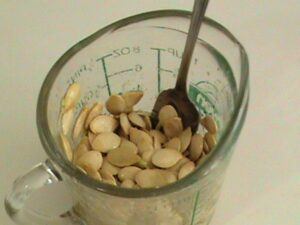 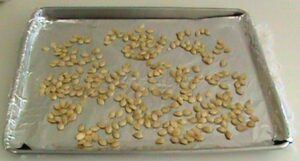 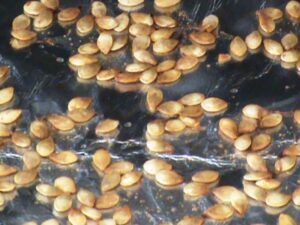 Evenly lay the coated seeds out on an aluminum foil covered baking pan and stick them in a 325 degree Fahrenheit oven for about 25 minutes – or, until the seeds darken.  Do a taste test – and, if the seed is mostly dry, crunchy, and easy to chew, they are ready to be removed and cooled.

A Little Riddle For You… 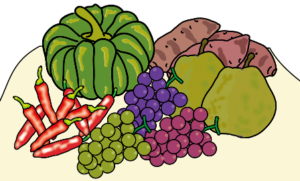 Following this rule, would I like cucumbers or peaches?