Ever Thought About Wearing A Body Camera? 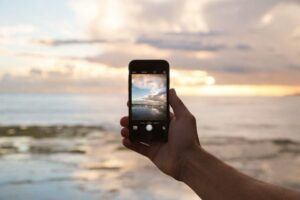 Yeah, I know that we can capture a lot of pictures and videos with our Smartphones.  But, a body camera will capture everything around us – and, the recordings are much clearer, steadier, and more focused!  Plus, we can keep both hands completely free.

We never know when we would like something recorded – at the spur of the moment – but, by the time we get our phone set up, that special moment could be long gone!

At one time, the only wearable body cameras were worn by a small number of law enforcement personnel – and, the cost was prohibitive for the average person – so unaffordable that even many state and local governments were not financially able to provide them for their police force.

Nowadays – as the technology gets better and the price becomes more competitive – common citizens are getting sold on wearing a body camera they can readily afford – clipped on their clothing – worn around their neck like a necklace – or, even as an unobtrusive pen sticking in their shirt pocket.

Not long ago, people scoffed at the idea that one day – just about every person would have their very own cell phone.  Today, there are very few folks who don’t have one.

The same holds true for wearable body cameras.  They are the wave of the future – to be able to record every minute of daily life.  The overall purpose could be just for pure enjoyment – recording special events – or even daily mundane activities.

However, the time may come when a device like this could even help provide proof in a legal case.  You just never know.

“Better to be safe than sorry!”  Wouldn’t you say?

Examples Of People Who Said, “I’m Glad I Had My Body Camera!” 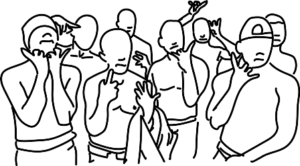 A passerby wearing a body camera witnessed a victim being attacked by a local gang.  The body camera footage was introduced as evidence – resulting in the arrest and conviction of the perpetrators.

A woman was attacked on the subway by a mugger who beat her and took her purse.  She produced body camera recordings that police used to identify and arrest the thug in record time.  And, after viewing the video, the jury had no recourse but to convict and jail him on theft and felonious assault charges.

A shopper was walking down an aisle in a Wal-Mart Supermarket and spotted someone “sampling” food and drink from bottles and jars.  Using the body camera information, Wal-Mart security apprehended the offender and was able to legally detain them until they could be arrested by the local authorities. 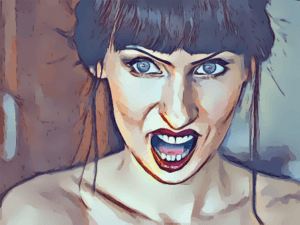 A divorced husband was being inundated by his ex-wife’s lies and accusations every time he returned the kids after the weekend.  Once he began wearing a body camera, the falsehoods and finger pointing stopped – giving him peace of mind.  Plus, a judge won’t take the side of someone making false allegations – since they would instantly see the truth in the video.

Things happen all the time.  You never know when you will need documented evidence of “crimes in progress”, “dishonest spouses”, or the “true and real perspective of other random occurrences.”

Now – I’ve Got The Body Camera For You!

The body camera is getting so common that it is almost universally being used by not only law enforcement across the country, but, it is also actively being utilized by security guards, bouncers, and civilians in general.

Now that I’ve convinced you how essential it is to own your own body camera, take a look at the best available in today’s market!

MIUFLY is trusted overwhelmingly by law enforcement and security organizations for its ability to render crisp, clear images in the form of snap shot pictures (JPEG) and rock steady videos (MPEG4).

It touts a 2 inch display to make it easy to review and captured footage.

Take a look at a random example of its daylight capture:

The night vision records at a high quality 1296 pixel resolution – and adds a “GPS (location) coordinates” stamp along with date, time, and user ID. 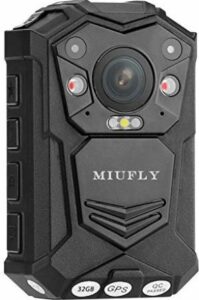 Not only is the video produced in ultra high resolution – allowing for a crystal clear view of the surroundings – the audio – received through a built-in microphone is easy to comprehend.  It would help, though, if the manufacturer had added a piece of foam to the mike for wind noise cancellation – but, it’s easy to cover the body camera’s microphone with a thin piece of black foam and secure it with tape or a rubber band.  Just keep the foam away from the lens or it’ll be a bit difficult to get good pictures and video.

A fully charged 2900mAh battery allows as much as 10 hours of recording time at a 480 pixel resolution (with IR and GPS turned off).

This unit is password protected to prevent recordings from being deleted or stolen. 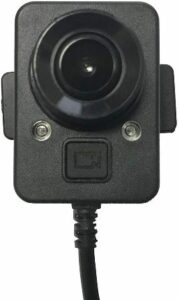 A drawback is that the MIUFLY 1296P doesn’t stay fastened very well to a lapel or shirt pocket.

But, all is not lost…

A Mini Auxiliary Body Camera Lens is an optional accessory.  It weighs just a tiny fraction of the main body camera unit – making it the perfect add-on to the MIUFLY 1296P.  It is so lightweight that you’ll forget it’s attached to your shirt.

There are two downsides to the mini auxiliary camera lens: 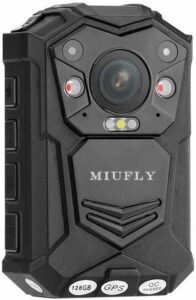 The basic MIUFLY 1296P has 32 gigabyte storage – and is a great buy for anyone that wants to be secure in the fact that the truth can be told – without bias or deceit.  This body camera is highly recommended by a majority of law enforcement locations where body cameras are used.

For those who want additional storage capacity and battery power, consider the MIUFLY 1296P with 128 gigabytes of memory and a 3000mAh battery.  With 15 customer evaluations, this body camera holds an impressive 4.3 out of 5.0 rating.

The CammPro I826 police body camera has basically the same bells and whistles that come with the MIUFLY 1296P – with 128G memory.  It’s a few dollars less but, the ratings are also a bit lower – 4.1 out of 5.0 – with 103 customers giving feedback on it.

Here’s a sample daytime video taken with the Cammpro I826:

It is equipped with: 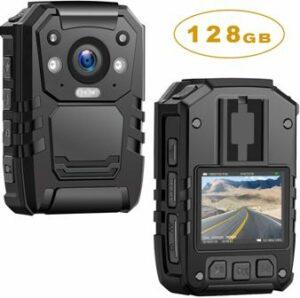 This CammPro body camera boasts a bigger battery (3500mAh) and an additional hour of recording time (11 hours) – for a few less dollars than the MIUFLY body camera.

Though the MIUFLY camera has a higher customer rating, the difference is negligible – which makes the CammPro I826 Body Camera a viable alternative – since it is also highly rated by state and local police – coming in a close second to the MIUFLY body camera.

Can you imagine the feeling of security and safety that a body camera can offer you?

I mean – just think about someone who may try to confront or threaten you – for no legitimate reason at all.  They’ll initially see the body camera recording their movements – and will naturally back off – unless they are visually impaired – in which case you can firmly remind them that they are being recorded.

Comment below or email me, noah@apathtoabetterlife.com, and tell me if you already have a body camera – or, are seriously considering one – for yourself – for your spouse – or, for both of you!