Why Do We Need Hidden Nanny Cams? 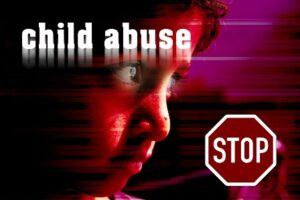 Because, child abuse by nannies and babysitters is rampant!  If you want to protect your kids, then hidden nanny cams are an essential part of keeping them alive and well.

October, 2018 – Norfolk, VA, police arrested a 27 year old woman and charged her with felony child abuse.  She had beaten up a 5 month old girl – leaving bruises all over the little girl’s face.

Two months later, in April, 2019, a nanny in Sarasota, FL, was arrested for mistreating and bruising 2 children – one was 2 years old and one was 8 months old. 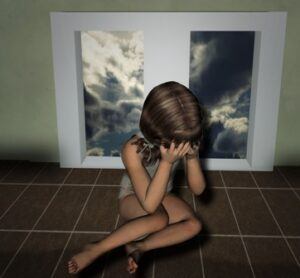 It’s not just nannies and babysitters that either physically or sexually abuse defenseless children.  A report by the U.S. Department of Justice shows that over 22,000 young victims of violence – under the age of 6 years old – were physically or mentally harmed – through neglect – exploitation – being slapped, punched, or strangled – or, molested in some form or fashion.  And, these heinous acts were carried out by family members (53.5%) – by acquaintances (36.7%) – by strangers (5.6%) – and, of course, by nannies and babysitters (4.2%).

This report was done in the 1990’s – which makes it pretty outdated.  And, child abuse has been on the rise dramatically over the last 25 years.

The National Children’s Alliance published the National Statistics On Child Abuse in 2015 – which discloses that, of the 70+ million American kids under 17 years old, about 1% of them – 700,000 – are abused or neglected in the U.S.A. each and every year – with an estimated 1,670 of them dying due to the violence they suffer.  Over a quarter million (259,999) of these kids were under 6 years old.

So, do we need hidden nanny cams?  Me thinks I’ve made my case and convinced you to shout a resounding YES!

But, Are Hidden Nanny Cams Legal? 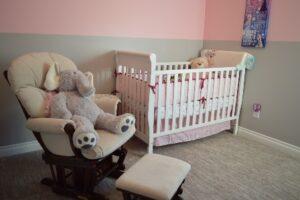 General speaking, it is entirely legal in all 50 states of the U.S. to install hidden nanny cams in your private residence without the knowledge of nannies and babysitters – as long as you don’t put them in bathrooms or a bedroom in which the nanny or babysitter may be sleeping.  For this reason, hidden nanny cams have skyrocketed in popularity over the last decade.

Personally, I would inform any nanny or babysitter that there are hidden cameras positioned throughout my house.  It would make them think twice before causing harm to any of my children.  I just wouldn’t tell them where the cameras were located.

Besides, if they are on the up and up – they won’t mind the surveillance.  And, if they are the abusive sort – they may not even take the job – so, they’ve been weeded out early in the hiring process.

What Kind Of Hidden Nanny Cam Should I Get? 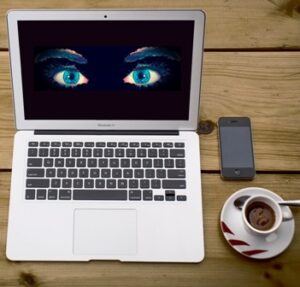 There are a wide range of options available for hidden nanny cams.  Most of them record audio along with video – in real time – with a date and time stamp.  Many have internet access and can be monitored by a Smartphone.  The more expensive ones offer motion detection – or a “stealth-like” incorporation into a common everyday household object.

I suggest, however, making sure that the nanny cam has at least a 720P (720 pixels) resolution – a 1080p (1080 pixels) resolution would be best.  Anything less than 720p would be a bit too fuzzy or grainy for recognizing key indications in the videos – of motion – and intent to do harm.

You may like to have a wide focus field, too.  Some nanny cams can cover a field size as great as 180 degrees.

Higher end nanny cam models can include two-way communication as well.  So, you can yell at them through your Smartphone.

Here Are Some Nanny Cam Options

From The Basics – To Those With All The Bells And Whistles 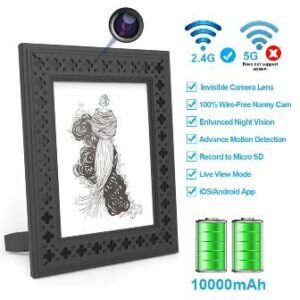 The FUVISION wireless hidden nanny cam is concealed in a 7 inch picture frame.  It is a 2.4G, Wi-Fi enabled device that can be remotely controlled.  With motion detection, it can stream real time color video or download video and pictures to your Smartphone.  The images are 720p but, customers say that this nanny cam produces amazingly clear video.  And, the night vision can see up to 30 feet with the lights out.

The long lasting re-chargeable battery can last a year on standby.

The camera lens has a 15 degree downward viewing angle.  And, all videos are date and time stamped.

Easy setup – quick to install.  And, you can easily change the pictures you want to display in the frame! 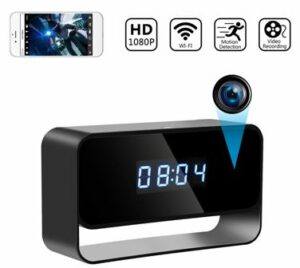 This clock-nanny cam offers 1080p resolution.  It operates on a 2.4G, Wi-Fi network.  The closer the camera is to the router – the stronger the video signal will be.  Its capabilities include retrieving both video and photos.  Night vision initiates automatically when the room is dark.

Buyers say the images are crystal clear – they don’t know why they waited so long to get such an excellent stealth monitoring device! 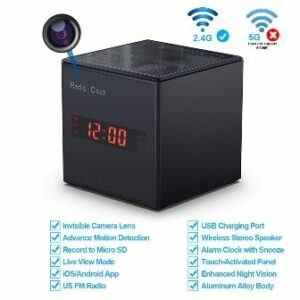 Over 62% of reviewers rate the FUVISION – Hidden Camera Wi-Fi Alarm Clock Radio as 5.0 out of 5.  Can’t beat that with a stick!

Not only is it an alarm clock with a hidden nanny cam – but, it is also an FM radio that gives crisp and clean reception.  The camera has a very clear 960p resolution.  There is motion detection, night vision (up to 30 feet in the dark), a USB charging port, and a touch activated control feature.

Connect it to a 2.4G 802.11g/n Wi-Fi network and access video and photos through your Smartphone.  Alternatively, a DVR can record anything that the camera sees.

An adjustable alarm sound can roust you out of bed with up to 110 dB.  A light dimmer is included with 3 dimmer settings.

There are 3 recording modes: 1) continuous recording, 2) scheduled recording, and 3) motion detection recording.  And, everything is date and time stamped.

Top it off with a sensitive touch activated panel for easy operation without all those clumsy, hard to find buttons that most clock radios have.

Comes with a wireless stereo speaker.

Atlantic Electronic System, Inc. has been incorporating spy cameras into ordinary household objects for over a decade.  Everything is Made in the U.S.A.  And, they’ve come up with some very unique applications… 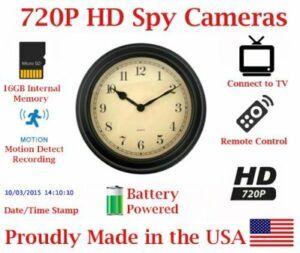 The AES Wall Clock is battery powered.  The re-chargeable battery will keep the camera vigilant for up to a month on one charge.  It can record for up to 10 hours continuously without recharging.

There is a 1-year warranty. 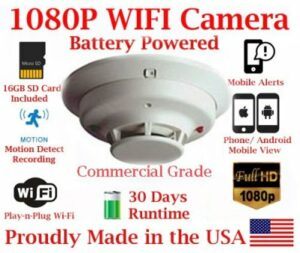 The AES Smoke Detector is also powered by a re-chargeable battery – which will operate up to 30 days in standby mode.

This device has a High Definition 1080p resolution video image and will broadcast over Wi-Fi.  It has a 16GB Micro SD card but, can be upgraded to a 64GB card.

Multiple units can be managed through the Wi-Fi network using a Smartphone. 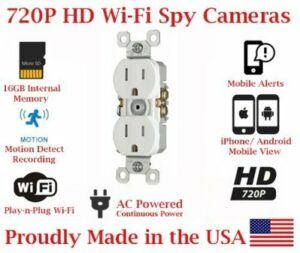 Just as it implies, this AES hidden nanny cam is inside an electrical wall outlet that actually functions as a wall outlet.  Plug in anything you want – lamps, TV, radio, vacuum cleaner – you name it.  And, the camera is still fully functional.  Now, who in God’s name woulda ever thunk that this is possible?

It doesn’t get much more covert than this.

Video and image resolution is 720p.  There is internal 16GB video storage.  You can easily pop off the cover, remove the video storage chip and upload it to your Smartphone or computer.

I think I’m sold on this product just because I don’t think anyone could ever guess that such an innocuous object could actually be recording their every move!

Each and every parent wants to make sure that when they trust a nanny or babysitter with their child – the child will receive quality care and gentle consideration – as appropriate.

When mom and dad are out of the house for a quiet and relaxing time away from the kids, they still want to have the peace of mind that their children are not harmed in the meantime. 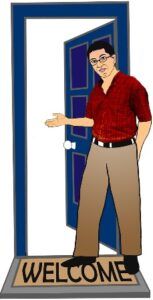 A hidden nanny cam – or two – or three – or more – is a great start.  Try using several different types of covert devices.

But, don’t forget to do background checks – and vet your sitters to ensure that they are not escapees from the nearby asylum.

Occasionally, come home “unexpectedly early” – from a night out – or drop by between evening entertainment destinations – just to poke your head in and say, “Hi!” – to remind the nanny or babysitter that they should be on their best behavior – because, they won’t know when you may be popping in again.  You could even have a trusted neighbor – or friend – drop by the house for a quick check on how the children are doing with the sitter.

How Do You Keep Your Kids Safe When You’re Not Home?

I’d like to hear your thoughts and ideas about keeping your little tykes safe from harm – in the comments below – or by email, noah@apathtoabetterlife.com.  Do you use a hidden nanny cam?

8 thoughts on “The Case For Hidden Nanny Cams”